skip to main | skip to sidebar

For Pentecost this year we had nine Baptisms.  The folks becoming baptized were people of all ages (6 mon to 35 years) which caused much celebration but also a bit of a catechetical task:  How do we teach and preach about Baptism to people at different ages.  We ended up having a big inter-generational class on Baptism.  Here were some activities we did and some learning for next time: 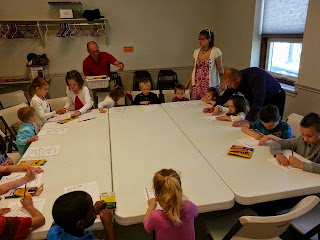 The basic point we wanted to get across to kids was that Jesus was baptized.  We had some coloring sheets, mazes and a YouTube video we showed.  I give this an A/A- for effectiveness.

I was anticipating 10 kids and 30 showed up so I had to divide them into groups.  It was great to have parental help. 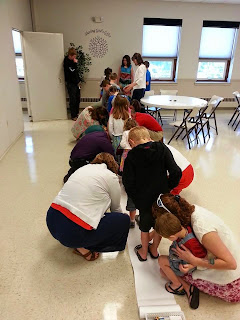 The next point we wanted to make was that Baptism is an invitation and command to follow Jesus.  To this end we did two things.  First, we had the kids make two footprints.  In one footprint they wrote their name; in the other they wrote something they could do to follow Jesus.  (Pray; go to church; be kind, etc).

This picture here shows one of a three groups that did this.  We ended up with a sheet 100 feet long that made a great children's sermon!

The other thing we did was have kids color in a big poster that said "Come Follow Me."  This was a great filler of time when the activities went to quick/slow.

I give this an A+ 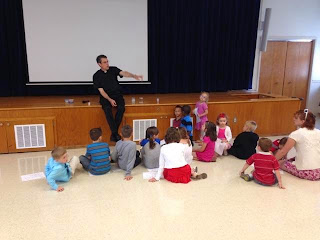 I wanted to convey something about the forgiveness of sins in Baptism.  I had this chemistry example set up whereby I would have a liquid (vinegar) clean off sins (baking soda).  It didn't really work because one kid kept saying over and over "That is vinegar."  Regardless, there are much better examples of chemistry and color change that I would use in the future, like this one. 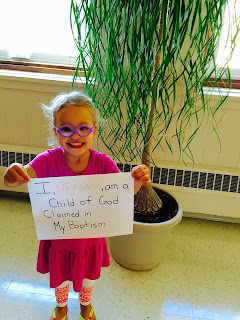 We had each child make a sign that said "I, ____, am a child of God, claimed in my Baptism."  We took pictures of the kids.  I hoping to make a collage of the pictures.  Again, we had a bunch more kids than anticipated and I don't know if we got enough photos taken!

This was great overall and the picture I have here is absurdly cute.

5)  Baptism as Body of Christ; Communion of Saints 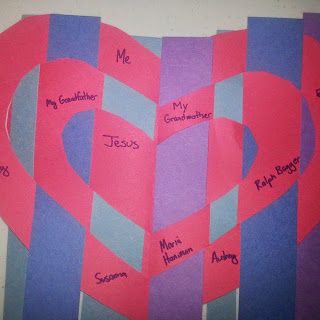 I think the craft was super cool.  But it proved too hard for many kids.  I think had I had a smaller crowd, I could have worked with the kids more; it was not at the "give them the supplies and model and let them figure it out" kind of thing.

There would be a way to simplify this in terms of multiple hearts; as it was, kids used lots of tape to make something that looked a bit like what I intended.
Posted by RJM at 1:31 PM No comments:

The Narrative Lectionary uses a longer section of Romans 8 (Year 1; most recently on May 24, 2015).  I offer here links to the two pieces that entail this larger section.

Summary:  Paul has just "let the people off the hook", telling them how they are forgiven in Jesus Christ (Romans 4 esp Romans 5).  They are free!  In this part of Romans, Paul takes up the question:  Does freedom in Christ give license for more sin?  HECK NO!  For Paul, the forgiveness of sins, that is justification, brings about a new reality in Christ, a new creation ready to worship and serve.  This should not be surprising for any of us familiar with the New Testament, much less, like me, a student of Luther!  Freedom from sin for service!

Some reflection on preaching:  The question I have been wrestling with recently is this:  How does Paul go about achieving this reality of creating servants for Christ?  This is probably a universal goal of pastors!  I maintain that Paul here preaches both law and Gospel; law in the didactic sense of presenting an image of renewed life in Jesus Christ (esp Romans 12 onward); law in the theological use as that which exposes sin (Romans 7); Gospel in its purity of what God has done for us (Romans 8).  While plenty of august theologians have tried to carve out Law from Gospel in Paul and then order then...my sense is that we should feel free to preach the Word, in its fullness, both Law and Gospel.  Throughout Paul's letters, he is simultaneously exhorting, witnessing, admonishing and proclaiming.  While Paul fully trusted in God to bring about the new creation (by no human work of the law, I add), he also had no problem exhorting people.  Neither should we.

μη γενοιτο ("may it not come to pass!"; 6:1)  This expression, literally "no - become", means something like "Heaven Forbid!"  It is a very strong expression of rejection of the situation (see Luke 20:16 for another example of this).  I once heard a terrible sermon that basically exhorted us to sin so that we could experience God's grace.  Paul here says: no!

δεδικαιωται (past participle of δικαιοω, meaning "to justify"; 6:7).  No major translation translates this as justify, instead choosing, "freed".  This is disappointing given how important justification is for Paul's thinking, certainly in Romans.  Often justification is seen as a transaction (ie, forgiveness) but when Paul uses justification language, he presents justification as resurrection from death to life.  The one who has died has been justified from sin; has been restored apart from sin.

οπλα (hoplon, meaning "tool"; 6:13)  The word hoplon has clear military meaning, as hoplon was the word for a military shield (http://en.wikipedia.org/wiki/Hoplite).  Paul elsewhere uses this word within a military framework (2 Cor 10:4 or Romans 13:12).  But warfare is not the only meaning of this word.  Liddell-Scott describes this as:

Does God need me in his army?  Perhaps another way to consider this passage is in terms of the first two meanings.  How can I be like a tool for a smith to produce a full harvest for God?  How can I be like the tackling of a ship that can allow the church boat to set sail?

παραστησατε ("present"; 6:13)  I find this an incredibly powerful image of presenting ourselves to God.  Paul repeats this idea of presentation ourselves to God in Romans 12:1.  He returns twice in this section (16 and 19).  This is an incredibly strange and powerful idea of standing before the living God reporting for duty.  Who can abide his presence?  One whom has been justified; one who has been baptized; one has been put to death, because only then has the power of sin be extinguished.  Only those who have died are ready to live for Christ!

Grammar concept
συν:  A number of verbs in this section have the prefix συν/"syn" in front of them.  This prefix in Greek means "with" or "together"; some English words use this prefix, such as "synthesis" or "syntax."  More often we see English words with the Latin prefix for "with" or "together", namely, "co."  Literally Paul is saying things like this:
co-buried (6.4)
co-united (6.5)
co-crucified (6.6)
co-live (6.8)
Worth pointing out:  This is tough to capture in English because Paul uses the prefix for the verb and a preposition:  Christ co-buried with us.  In short, Paul is driving home the "cooperative" nature of Christ's work on our behalf.  Christ does not die in our place; there is nothing vicarious about this.  We too die, but we die in the cross given to us in our Baptisms instead of on a cross on  a hill in Jerusalem.
Further - Paul will use a series of συν verbs in Romans 8 (Holy Trinity text)
Posted by RJM at 3:32 PM No comments:

The assigned Gospel reading for the 7th Sunday of Easter (if you are using the Revised Common Lectionary) comes from Jesus’ prayer to the Father on behalf of his followers before the Passion narrative. When looking at this text it can be helpful to look at a few things: 1) Read the entire prayer. All of John 17. 2) Pay attention to the larger context. This prayer comes immediately after Jesus finishes his long-winded farewell discourse (14:1-16:33) where he speaks to his followers about what discipleship looks like: “I am the way, the truth, and the life”; “I am the vine, you are the branches”; “Love one another just as I have loved you”; and the great “I have said this to you, so that in me you may have peace. In the world you face persecution. But take courage; I have conquered the world!” (which sadly does not appear in the Revised Common Lectionary). This is the transition piece from discourse to Passion, from teaching about discipleship to modeling discipleship.

κόσμος (world) appears 19 times in this chapter and is incredibly important in the theology of John’s Gospel. The world came into being through the incarnate Word, Christ is the lamb of God who takes away the sin of the world, For God so loved the world…, “I have conquered the world!”

Being that this is the Easter season, a time of year when the Church has historically expanded on the teachings of the faith for the newly baptized, the appropriate question seems to be, “So What?” What does this text say about how the resurrection, Christ’s conquering of the world, mean for me (or my congregation or the entire world)? If Christ loves me (my congregation and the Church) so much that he has sent me (us) into the world, then how does that affect the way I live in the world? How does that love and protection (17:15) shape my actions and words as I work for peace and justice in all the world?

The Word made flesh